Fashion / What Is Up With That Kamala Harris’ Vogue Cover? What Is Up With That Kamala Harris’ Vogue Cover?

Vice President-elect Kamala Harris was featured in the latest issue of Vogue. What was supposed to be a no-brainer, turned into one of the hotly-debated covers in recent history. We look at the backlash.

Landing on the cover of Vogue is a feat coveted by models, A-list celebs and key political figures. Expectations are usually high when it comes to the big reveal, judging from past covers, there’s usually an element of grandeur, aspects of fantasy and a welcome over-the-top vibe. So when Vogue‘s latest cover was leaked online featuring  Vice President-elect Kamala Harris, it created more voices of ire instead of awe. So what was the feedback exactly? I break it down here …

They were VERY excited about their cover. Naturally. But it was leaked online before the official reveal. And the backlash was fierce. Word came out earlier yesterday that Harris and her team actually approved another photo which was vetoed by Wintour who does make the final call as the EIC. With that backlash dominating social when such an historic cover is hitting the web and stands, Vogue immediately tweeted out both images as part of their official announcement of their latest issue.

To be honest I barely skimmed the official cover when it came across my newsfeed. I saw her and her Chucks and scrolled past. My mind was preoccupied with other more pertinent matters going down in Washington. But the closer I looked at the photo, I was honestly stunned. It really looked like a test shot I would do at the start of the shoot to help the photographer and his crew set up the right lights.

Her niece Meena Harris also had something to say.

A Little Too Familial?

Harris no doubt has an air of approachability, which has been seen in various viral videos. Whether it’s her talking to young teens about public speaking in an impromptu meet up, dancing the drumline during a Democratic event in South Carolina, or sharing her turkey recipe with laser focus with a someone from the crew while waiting for the producer on the other end of her ear piece to give her the on-camera cue.

So for the Vogue cover she appeared in a black tapered jeans, tailored blazer and a pair of (obviously worn) Converse Chuck Taylor sneakers. With a paltry backdrop of a few drapes of coloured fabric designed to reflect the colours of her sorority.

But that vibe came across as highly inappropriate especially when it comes to profiling someone who will be holding the second highest position of power in the country. And someone who has broken numerous barriers doing so. Would her male counterpart be featured as such? Probably not.

A Problem With Black Representation?

During the summer of BLM where companies were also going through their own stages of reckoning, it was reported that Vogue along with Wintour had tokenized black employees at the office. Readers have often noted Vogue‘s problem when it comes to lighting Black faces, using past covers as examples. So is this just another case of a white magazine not understanding, nor appreciating the value and the beauty of a Black woman? 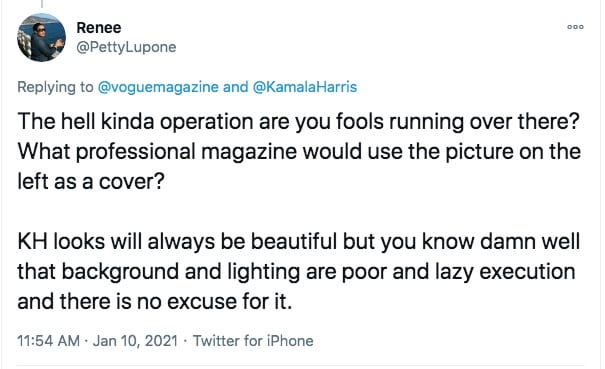 Can We Blame This On COVID?

We have all seen how COVID-19 has upended various industries including the magazine industry. Especially when it comes to photo shoots. Gone are the days of a room full of glam squad, stylists, production assistants, the talent’s entourage etc milling about while the photographer and their team set up their spot. Now it’s either an extremely small and tightly controlled closed set or the talent would just their photos themselves with their own crew already int heir work bubble. We’ve seen Naomi Campbell’s amazing work here. So could it be that the creative directors were already limited on what they could do due to COVID protocols with the the most power South Asian/Black woman in US politics? Could be.

That was my first thought…

Then “Celia” on twitter, refreshed my memory that in fact, Vogue has had a multi-page cover shoot (which was outdoors) with Harry Styles the month prior. Before that, they had a stunning outdoor shoot of Paloma Elsesser as well.

With COVID and BLM we have seen a shift when it comes to the tone of fashion magazines. Whether they are reading the room by necessity due to COVID lockdowns, or by proactive concerns of understanding their reader’s priorities in terms of what they want to see and read, the over-the-top escapist multi-page photo shoots with exorbitantly priced pieces may come off as tone deaf when people (including their readers) may too busy juggling WFH with their kids, or may have lost their jobs altogether, all the while trying to put food on the table and stay healthy.

In addition to that, there’s also the fear of a backlash by going down the old trope of sexism and double standards by making Harris shoot so fashion focused. We are in a different time after all.

Who knows really. One thing that we can agree on is that photography and art is very subjective. It can be brilliant to one, and blah to another. And I’m cool with that.

Ps. Tell me, what do you think of the cover?